The single most difficult thing I have encountered while writing, rewriting, and re-rewriting Thorn is how to portray a divine being. As my examples of how to do this I look to two historical writers - John Milton and C.S.Lewis. Milton, one of the most influential Christian writers of all time with his Paradise Lost, portrayed God in that same epic work. However, his attempt to portray God ended up falling short. After all, how can a finite, fallible being portray an infinite, infallible being? Perhaps his error was in trying to create the one and only God, whom we know through Scripture. Lewis succeeded with his character Aslan, the Christ-figure in Narnia. Is this because Aslan was his own creation, not an attempt to actually recreate the True Divine Being? In Thorn I have a divine being who interacts with the characters, but I struggle with how to portray him. I think in a lot of ways Lewis succeeded because Aslan was a Lion, not a Man, allowing him to immediately place in his readers' minds the connotations associated with lions: power, majesty, and innate goodness. If he had used a snake to portray Aslan, I think it's obvious Narnia would have failed entirely. If he had used a man, he would have had to spend time convincing the reader of the qualities automatically associated with a Lion. I don't want to use an animal, however, for various reasons. So now I resign myself to convincing the reader... yet to fail at this would be to lose the reader for good. Ugh, its so agonizing! 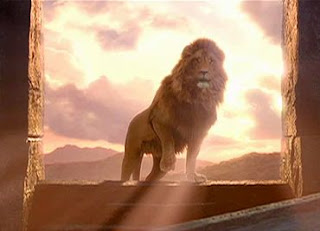