Last week I had the amazing opportunity to tour seven cities with three rockstar Penguin authors: Marie Lu (Legend), Brenna Yovanoff (Paper Valentine), and Andrea Cremer (Nightshade series). Here's a quick photo recap of what went down with the West Coast Breathless Reads tour--and at the end, you'll have a chance to win one of three prize packs about which I am very excited because they are supremely epic and unique and I'm still considering not giving any of them away and just keeping them for myself because that is just how supremely epic they are.


So we started in Los Angeles. Here we are at the Grove Barnes & Noble. It was like, three stories tall and pretty much as epic as a bookstore gets. We got to ride on a lot of escalators. I am a big fan of escalators because, well, stairs. Also, this store posted our tour as the Breathless Domination Tour and I mean COME ON PPL THAT ROCKS so Penguin, if you're listening and you're considering tweaking the title of the tour any time soon... well, just sayin', here's a kickin' idea for you. 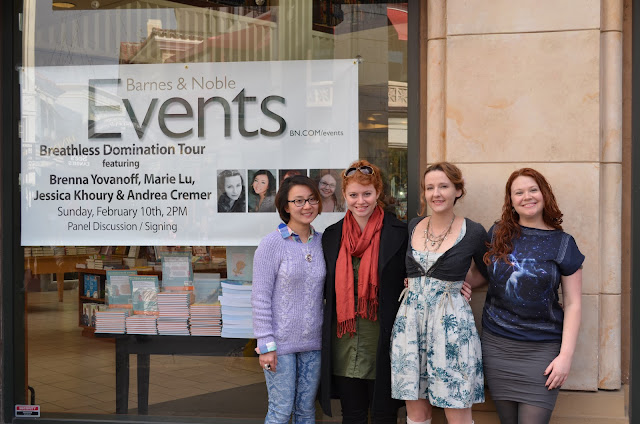 I was pretty stoked about the LA event because I got to see my uncle, who lives there, and who I don't get to see very often. He drove me around Beverly Hills and we looked for movie stars, but we didn't find any. Oh well. 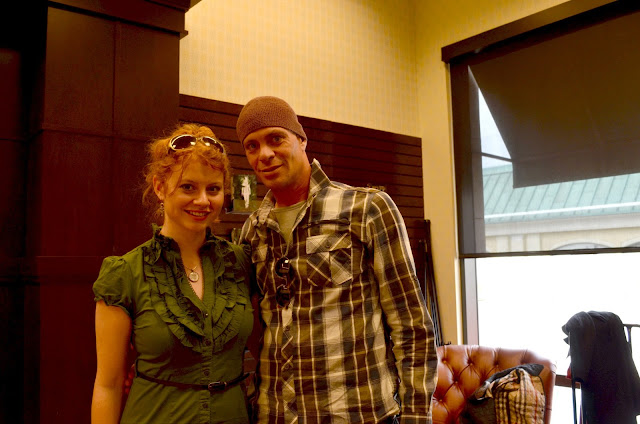 So then the next day we drove up to LaVerne, CA for an event at Mrs. Nelson's Book Shop. I was really excited about this because I'd met a lot of the Mrs. Nelson's staff at a SCIBA dinner on the Queen Mary a few months before, and heard a lot of great things about this adorable and personable bookstore. Speaking of the staff at Mrs. Nelson's, here they are: Us authors being authorly: 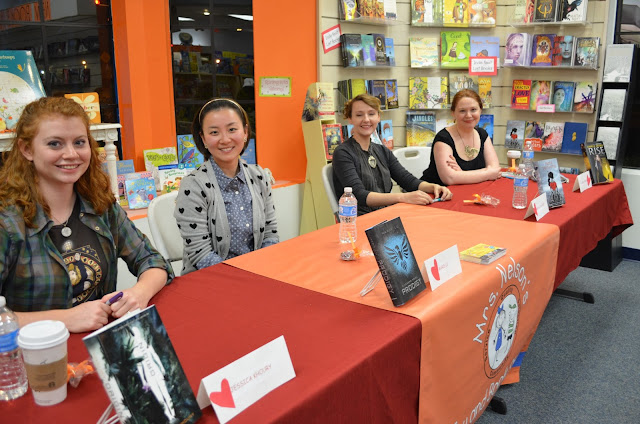 The next day was San Francisco, at A Great Good Place for Books. The store was packed full of people, which was pretty awesome, and also we got to meet Andrea's brother, wife, and extraordinarily adorable niece. 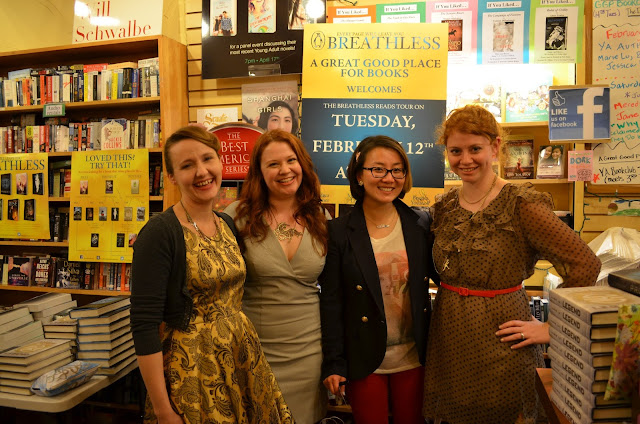 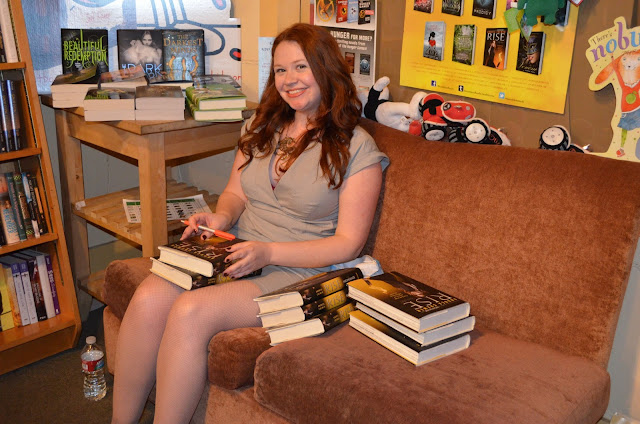 I'm getting out of chronological order here, but just go with it. So before we went to A Great Good Place we went to the Las Lomas High School, and were hosted by the school book club which contained some of the most enthusiastic readers I've ever met. Seriously. These kids had us walking ten inches of the ground by the time we left, so we're pretty much enamored with them. 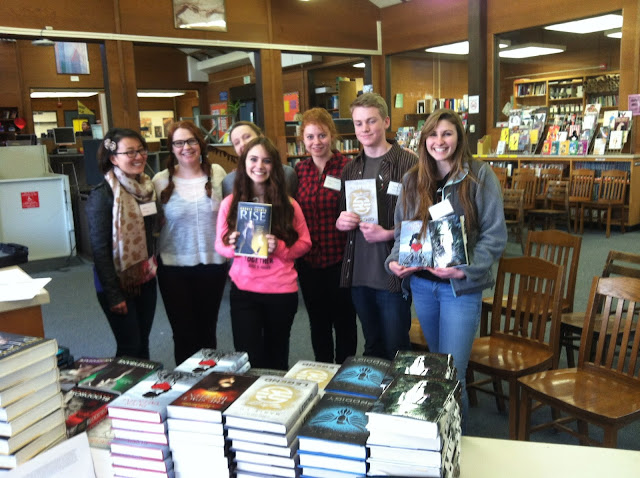 Andrea and I geeked out over the library copies of our books, because they had actual library card inserts--you know, the kind where you can pull out the card and see what other kids have been reading the book before you, and their check-out/check-in dates so you can see how long it took them to read it and compare your own speed (oh wait... maybe I was the only kid who did that...) Anyway, it was pretty sweet and so we took pix. 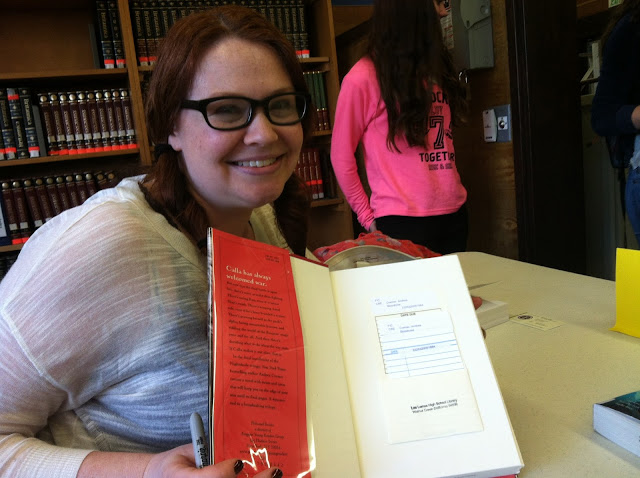 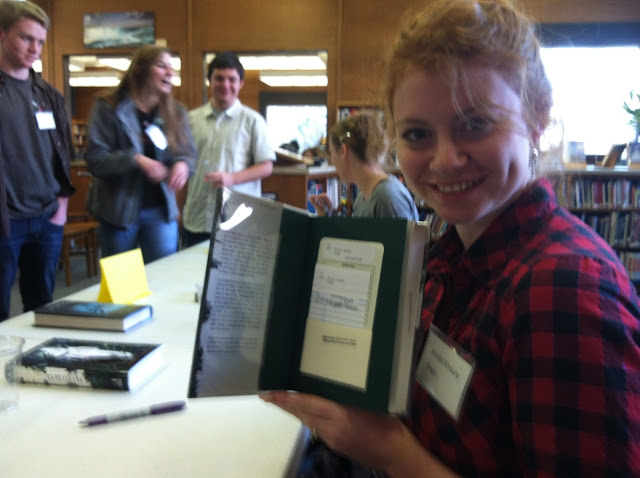 The next day was Portland day. I'm a huge fan of Portland because it rains a lot there and I'm the kind of person who enjoys sitting around staring out rainy windows contemplating things because it makes me feel deep and artistic and anyway, that's beside the point because what I really want to tell you about is that

A) the awesome hotel we were at put copies of our books in our rooms for us to sign, so they could add it to the hotel library which was stocked entirely with books by authors who had stayed there (I mean how much schnazzier can you get?) 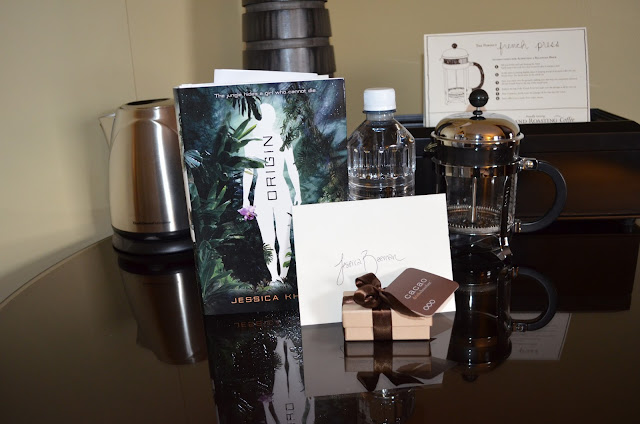 And also I found this waiting for me. Because you see, I married this guy and he's sort of like the sweetest, best, most awesome guy ever because he had Valentine roses delivered to my room since, you know,  we were on opposite sides of the continent which was kind of a bummer considering it was V-Day and all.
Anyway, I like him a lot. 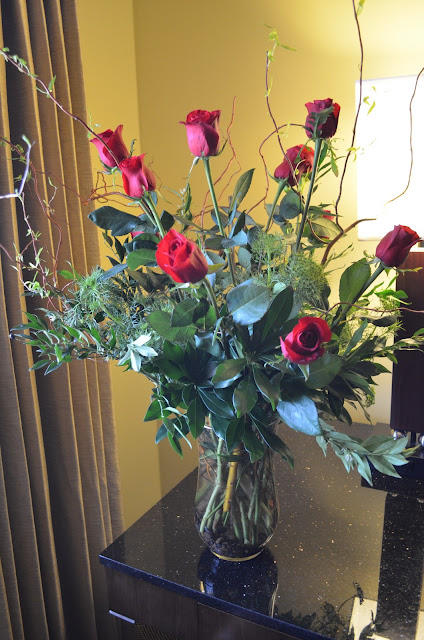 Also in Portland I got to see my other uncle, and my aunt, who took me out for droolworthy Portland Lebanese food. 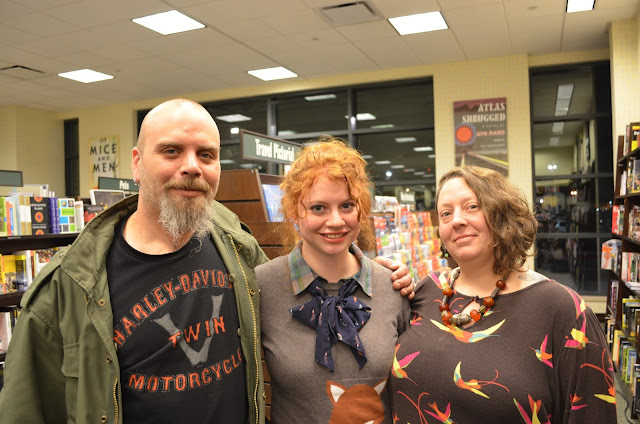 Next up was Boulder, CO, on Valentine's Day. Several super awesome things happened this day. First, it snowed. This is a significant detail if, like me, you are from the South where it snows properly maybe once a decade. 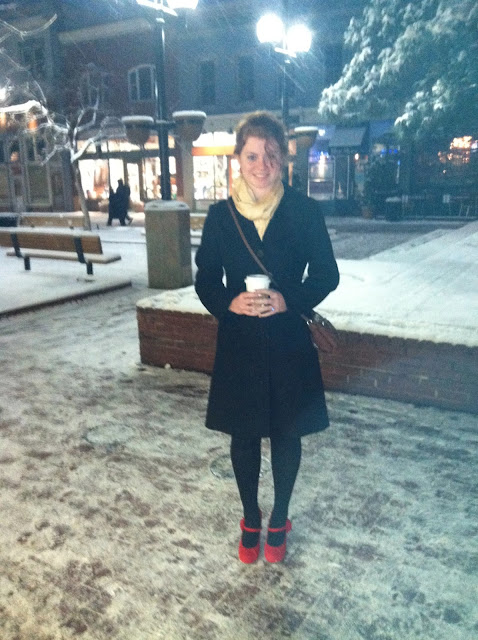 Other notable moments: the amazing readers who braved the snow to come to the event at the Boulder Bookstore. And the delicious Latin restaurant we went to afterwards with the fabulous Kristin Nelson, who is Marie's agent and who also gave us V-Day chocolates, so three enthusiastic cheers for Kristin! Thanks, lady!


So then there was Austin, TX, a city I've become quite a fan of recently, ever since the epic epicness that is the Austin Teen Book Festival. Anyway, we had the pleasure of going to the Ann Richards School for Young Women Leaders and it is every bit as awesome as its name (due in part to the fact we were welcomed by their marquee) (it says "Reading leaves us breathless): 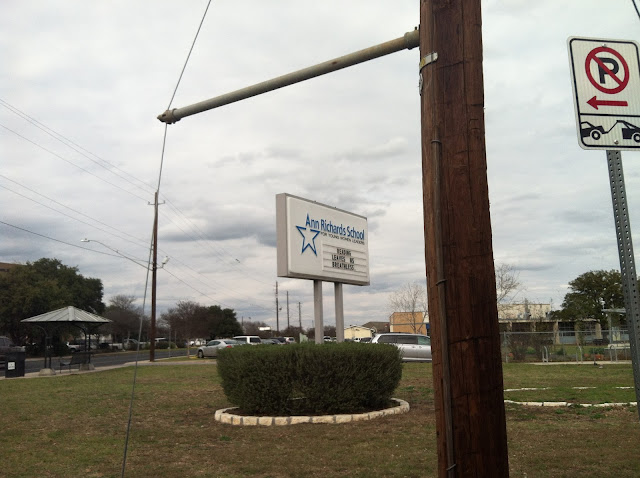 There are several reasons why this stop was so memorable: 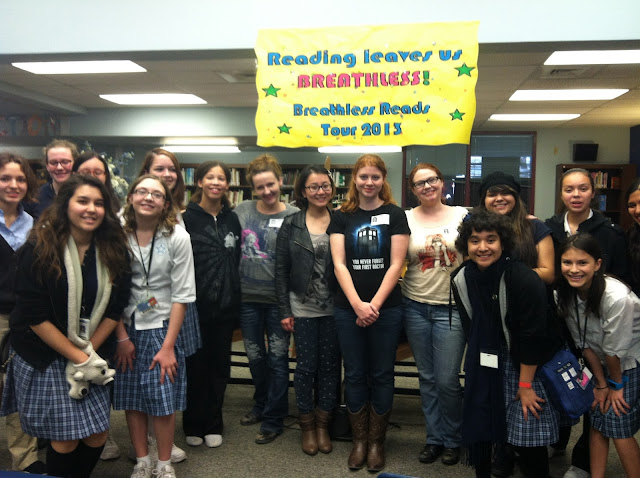 1. We each got to sit in the "author chair" and then sign our names.  There were some pretty kickin' names on that chair, let me tell you. This chair has seen many a rockstar's derriere. 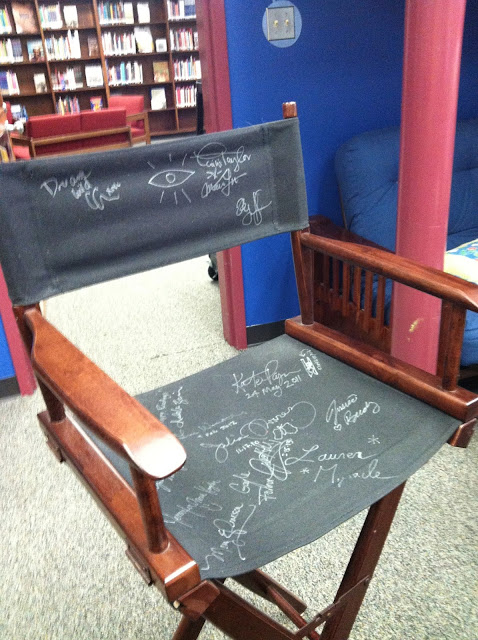 2. And then there was the school's totally mind-blowing obsession with Doctor Who. The moment I saw their life-size TARDIS cutout I basically was in love. When I saw their life-size cutout of David Tennant I was ready to propose marriage. Problem was, so was Marie. Well, all of us, really. Whovians FTW! I think we would have tried sneaking DT onto the rest of the tour with us, except maybe the librarian would have sent her life-size cutout Daleks after us to get him back (I don't know if they actually had life-size cutout Daleks but after what I had seen thus far, I wouldn't have put it past them.) Also, I just happened to be wearing my You never forget your first Doctor shirt that day so, you know, can you say DESTINY?? 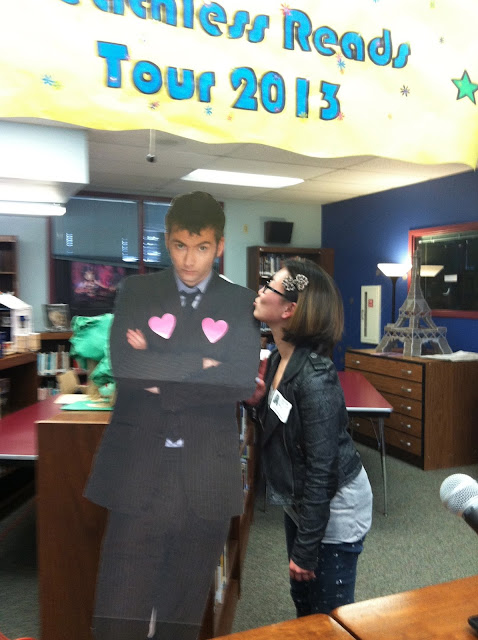 Hands off, Marie! He's MINE! 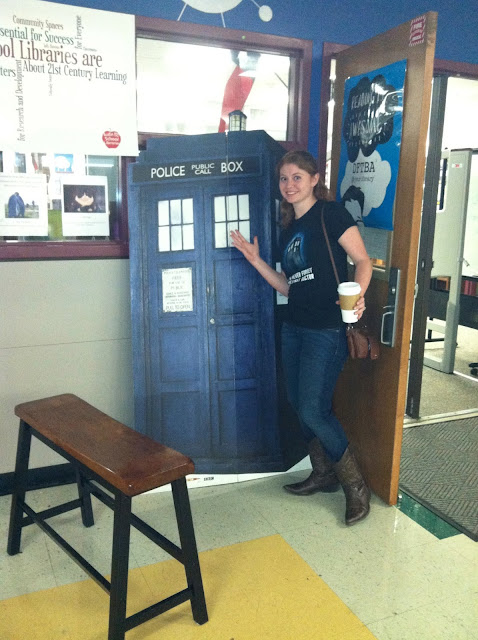 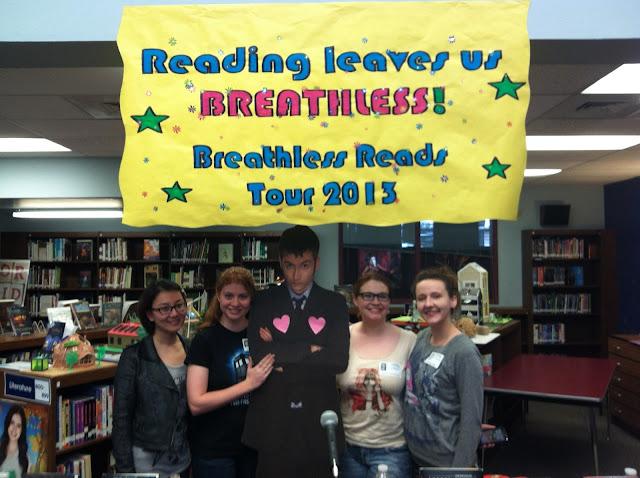 Our final stop was in Salt Lake City, UT, where we were joined by the inimitable Ally Condie (Matched) for our last panel at the Barnes & Noble in Orem. With standing room only, this event was a perfect conclusion to the Breathless tour. 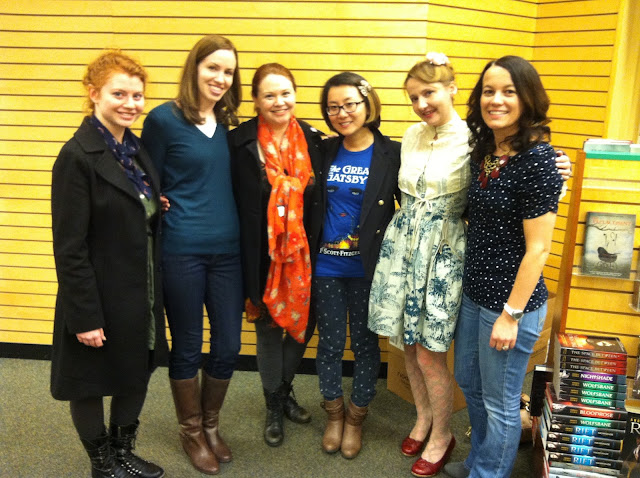 All in all, I have never been so honored to be part of such an inspiring group of talented authors, and it was a joy and privilege to learn from Brenna, Andrea, Marie, and Ally as the week progressed. I was so humbled by the amazing response we had from readers, teacher, librarians, and booksellers all over the western United States, and extend a mighty THANK YOU to everyone who attended and made these events possible! And a huge THANK YOU to Penguin Teen's matchless publicists, Elizabeth Zajac in particular, for putting together this tour and making every stop so memorable for all involved!

1. Both Marie Lu and I wrote Redwall fanfic as teenagers and we both subbed failed high fantasy manuscripts before Legend and Origin.

2. Brenna Yovanoff's first drafts look like giant MadLibs because she leaves blank spaces when she can't think of the perfect word to put in a sentence.

3. Andrea Cremer began writing when a horse crushed her foot and she was laid up on a couch all summer as a teenager.

4. Both Brenna and I played varsity soccer in high school and college; and we both rock at it.

5. Marie still dreams of being a fighter pilot and is currently on a quest to do a ride-along with the Blue Angels' No. 7 pilot, despite the Navy not returning her phone calls.

6. Both Andrea and I are fiercely proud of our Scottish heritage; my clan fought for her famous ancestor Robert the Bruce in the Scottish War for Independence (*cue bagpipes).

~~and now for the giveaway portion of this program~~

To celebrate the success of the Breathless Tour, I'm giving away three prize packs! You have to enter each giveaway separately! Entering one will not automatically enter you for all of them.

1. Pia's Library
In Origin, Pia's reading material is severely limited by the scientists. But what if she had access to any one of the amazing bookstores we visited on tour? What reads would she pick first? The Breathless ones, of course! This prize pack consists of PRODIGY and LEGEND by Marie Lu, THE REPLACEMENT by Brenna Yovanoff, and an ARC of SHADES OF EARTH by Beth Revis. 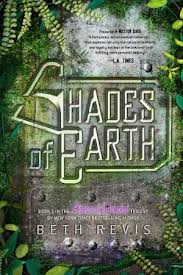 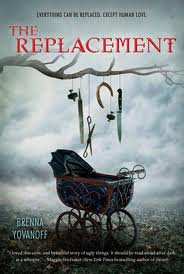 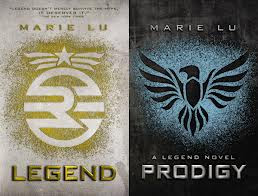 2. Alai's Spots
In researching for the creation of Alai, Pia's pet jaguar in Origin, I learned so much about the dire situation surrounding the big cats of the world. Not just jaguars, but lions, tigers, leopards, cheetahs--almost every species of big cat is in danger of deforestation, poaching, illegal pet trade, and dwindling numbers. Each item in this prize pack goes toward supporting causes to save the big cats, in particular, the "Cause an Uproar" project run by National Geographic, which is dedicated to the preservation and nurture of big cats all over the planet. This prize pack contains the NatGeo DVD program In Search of the Jaguar, a "Cause an Uproar" wrap bracelet, and a one-year subscription to National Geographic. 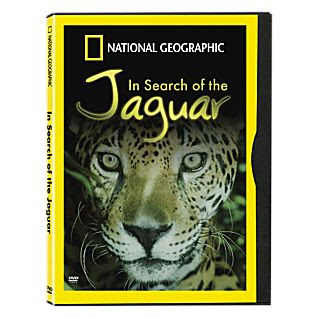 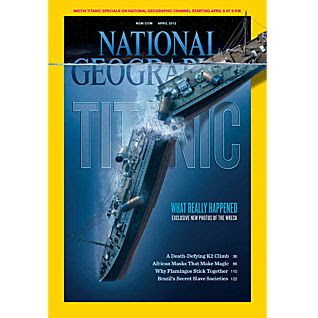 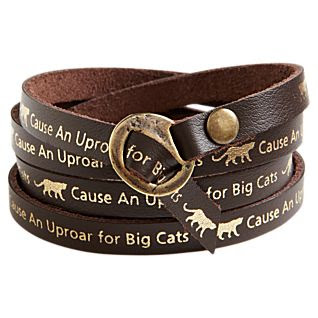 3. Eio's Jungle
Jewelry and accessories plays a large part in Origin, from Eio's jaguar necklace to Pia's bird pendant to Uncle Antonio's snakeskin belt. This prize pack contains two unique jewelry pieces inspired by the Amazon rainforest: a pair of vintage, enamel-leaf earrings and an orchid necklace with pearl and amethyst accents, representative of the deadly but beautiful elysia orchid which gives Pia her immortality. Also included is a signed hardcover copy of Origin! 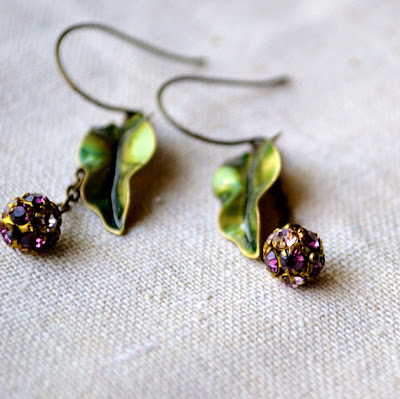 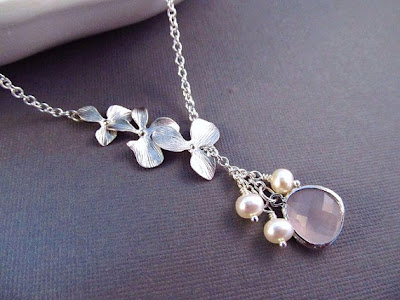 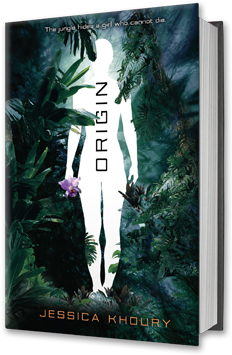 To Enter the giveaways
complete the forms below!
Remember: each prize pack is its own giveaway; you may enter for all three packages but to do so you must enter on all three forms!

Three unique winners will be decided at random. The more entries you complete, the higher your chances of winning. Contest ends on Sunday, March 3 and winners will be notified by email. If you are a winner and do not reply to your email within fourteen days your prize will be forfeit.

Open to USA and CANADA only!

Questions? Ask them in the comments!

a Rafflecopter giveaway
Posted by Jessica Khoury at 4:02 PM 66 comments: